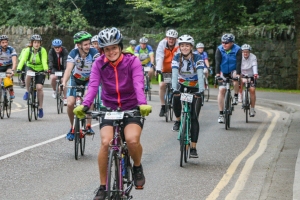 It was a very early start for some on the 34th Annual Ring Of Kerry Charity Cycle which took place on 1st July and Killarney Camera Club were out and about to help capture the excitement/relief at the finish line for this very worthwhile cause!

It all kicked off with a steady flow of cyclists hitting the road from 6am and even some were gone well before that, one of our club members, Keith Johnson, was on hand to capture all the action from the start line during the first couple of hours of probably the ‘Biggest One Day Charity Cycle in Ireland’.

The legendary GAA footballer Colm Cooper and Olympic Silver Medallist Sonia O’Sullivan along with 10 year old Amy O’Connor from Killarney rose the flag at the start line just after 7am where thousands of cyclists hit the road. Over 9000 cyclists took part in the 180km cycle raising much needed funds for charity. Every cyclist that died on the road since February was also remembered at the start line during the opening ceremony.

Damp conditions were experienced early on along the West Coast leg of the journey, going by what some first timers of this arduous cycle told me. But they will be back again for more next year they said, such was the craic they had along the route. 81 year old Pat Moynihan from Co. Tipperary was the eldest to participate in this year’s cycle and Sonia O’Sullivan was also spotted crossing the finishing line after completing the event. People from all over the world took part this year.

From 11am onwards Killarney Club Members were positioned on the Finish Line where we tried to captured all the excitement as the cyclists passed bye, there was a great buzz down there. Cathal Walsh gave great encouragement to the participants with his loud speaker and he added to the atmosphere congratulating people as they crossed the finish line. More of our members were circulating in the refreshments area and around the Podium photographing cyclists as they proudly lifted up their 2017 medals up to the camera.

All photos can be downloaded here

The photos are organised into three different catalogs of albums, the start line, finish line and podium/entertainment area. The albums are organised based on the time of the day the photo was taken (hopefully all our camera were synchronised!). So if you finished at 4:33pm then look in the album “1630-1634 Finish Line 2017”, the same applies for the start line and podium photos. The photographs are named based on the time they were taken too so you can quickly find your photo!

Thanks to all our club photographers who helped out by taking photos on the day and special thanks to both Terry MacSweeney and Christopher Fitzgerald for giving their time in collating and uploading all 13,000+ photos to the Killarney Camera Club ROK Flickr account. I hope we captured you as you crossed the finish line and that these photos provide you with a memento from the occasion that was The Ring Of Kerry Charity Cycle 2017.